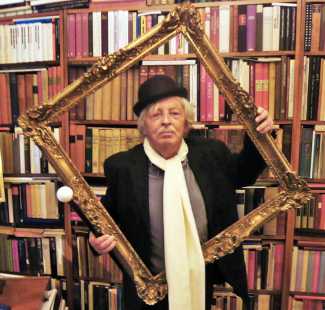 Look out for Part 3 of Hans-Jürgen’s interview, coming soon.

Next I made some further important decisions. I decided not to collect books if they were written in French, for the simple reason that I couldn’t read them. I decided that I wouldn’t collect portfolios so large that they could only be presented in an exhibition. And I also decided that I wouldn’t hide my collection away as ‘my secret property’, that I wanted to share it as felt appropriate.

In old age my standards have become even stricter. It makes me wonder if in the end my extreme discrimination might leave me with just one picture, but a picture I would never have found if I hadn’t collected and looked carefully at ten thousand images!

I am particularly cautious when it comes to contemporary art. I am often encouraged by artists to purchase something from them. A solution I have found for myself is that when I discover an artist I feel has something special to offer, I commission them to create a series of illustrations for my favourite book, Georges Bataille’s Histoire de l’oeil. The book was first illustrated by André Masson, then by Hans Bellmer. I now have some around eighteen portfolios of my own for this important experimental work.

I have been fortunate over the years to be able to forge deeper friendships with some of these contemporary artists. In particular I would mention Martina Kügler, who died three years ago; I knew her for forty years, and admired and collected her works. Her work has had a lasting impact on my understanding of art.

And of course with such a large collection there are always the issues of cataloguing and storage. It became clear that keeping important information about artists and their work on small pieces of paper made searching very difficult, so the creation of a computer database has been very important. Sometimes I feel that I am less of a collector and more of an administrative clerk!

And to solve the storage problem I decided to rent a locker at my bank, but I soon realised that whenever I wanted to show a collector friend something important it wasn’t available. So I took everything home again, and now the art has taken over most of the cupboards and shelves, even the box under the bed. It feels important to have my collection near me.

Tell us more about the Venusberg project, what you have achieved and what you plan for it.

I have always believed that a collection shouldn’t be a secret, and one way of making it public is through the publication of books. I know this is somewhat of an antiquated decision for the digital age, but a book is a sensual object that you can touch. My ‘big’ books like The Erotic Museum and The Temple of Venus, published at the end of the nineties, were very successful; they appeared at the end of a liberal era and introduced readers to art they had never seen before. In that same period, however, the production of pornography increased exponentially, and as the internet gained in importance, providing instant gratification, the ‘alibi’ of art for those who had previously sought access to sexually arousing images via the printed page rapidly lost much of its appeal.

But I remain firmly attached to the form of the book. Since the internet has also made it possible to design books myself and for the books to be created print-on-demand, I have gradually been making portfolios of some of my collection available on paper again. It’s a slow process, but I have had moderate success and a small but loyal following of collectors.

But the success of the Berlin museum waned over the years, and the company made no effort to revitalise it with specialist exhibitions and interesting acquisitions in order to attract new audiences. The inventory of the Cologne museum was stored in a cellar in Flensburg and forgotten. It was now clear to me that it wasn’t a love of art that drove Beata’s project, it was nothing more than a business idea that was supposed to make the sex shop next to it more attractive.

In January 2020 the museum’s entire holdings were auctioned at an auction house in Berlin. Here, too, I worked as a consultant, and so I went from being the museum’s midwife to being its gravedigger.

By contrast, the Amsterdam Sex Museum, the Temple of Venus, has remained successful over the years. Apart from the fact that the whole city is a single advertisement for the museum due to its red-light reputation, knowledge, money, time, and above all love, the prerequisites for its foundation from the beginning, have ensured its success.

Harvard University in Cambridge, Massachusetts has a more intelligent policy. In 2012 the collector Julio Mario Santo Domingo bequeathed his library to it. Known as the Ludlow–Santo Domingo Library, it is ‘the world’s largest private collection of material on altered states of mind’, and includes a large collection of French erotica. Unlike the other ‘public’ collections, it is open to researchers.