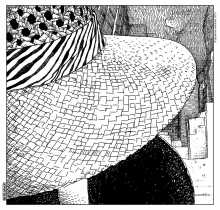 ‘There are many reasons why I am so jealous of my true identity, but the one that matters most to me is precisely this: I ask only for one thing, please appreciate my art for what it is in your eyes, and not because of or through the biographical prism of its creator.’ So writes this original, versatile, bold, challenging illustrator, whose eye-catching imagery first started appearing online in 2012. She continues, ‘It doesn’t matter who’s behind my drawings, because in my opinion art ultimately transcends that. In any case, the private person does not coincide with the artist. To create means to go out of oneself, to let the other speak. Everything else is only an anecdote, because what matters is not where a drawing comes from, but where it takes you.’

And that’s as much biography as ‘Apollonia Saintclair’ is going to give anybody! We might follow clues such as her obvious fluency in English and French, or that her online store requests payment in Swiss francs, or a hint of Dutch idiom in her almost-perfect English. She is happy to tell us that she is ‘a long-time resident of the Old World, splitting her time between the kitchen and her studio,’ but apart from that her work speaks solely for itself.

Having said that, when asked about her influences, she agrees to expand:

‘I arrived at comics when I discovered Milo Manara and Moebius (Jean Giraud), thanks to the complicit indifference of a bookseller who had, in the farthest reach of the basement in his store, a shelf behind the other shelves for the initiated, which brought together the best of adult comics. During an intense season of discovery, I spent every free moment stuffed in this sultry and forbidden cavern. I still wonder today why I did not get expelled, as my presence was too insistent in this corner of the bookstore explicitly prohibited to minors. I devoured, read and reread all that was available, Crepax, Druillet, Bilal, Liberatore, and the sulphurous Phillipe Cavell, whose Hermit of the Apennine left a lasting impression on me. I was intuitively interested in comics whose authors worked each frame as a separate painting, and whose scenarios went beyond mere narrative and tackled the conceptual springs of desire. Manara’s skill at drawing sex at every turn of page is superb masturbatory support, but it’s also a wonderfully perverse parable about the need to control or be controlled. And you can extract each vignette, enlarge it and put it on the wall: everything is there, the drawing is self-sufficient. For me, comics and eroticism are inextricably linked – a sensual emotion superimposed on an aesthetic emotion. In my opinion eroticism is not a genre among others, it is the major genre of comics. There is no author whose work fascinates me who has not measured themself through eroticism.’