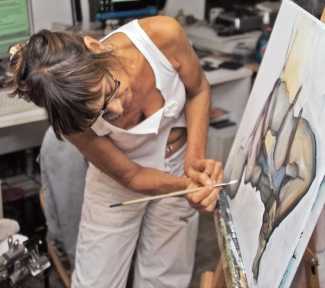 Carolyn was born in the English city of Chester and grew up in North Wales. She studied art at Leeds University College of Art and Goldsmiths College in London, then taught art at Minchenden School in London, and lived for three years in Bermuda before moving to New York in 1979. She worked in the corporate world until 1998, when she took the life-changing step of becoming a full-time artist. It was a brave and rewarding change, and Carolyn and her work are now firmly established and for the most part adequately rewarded. 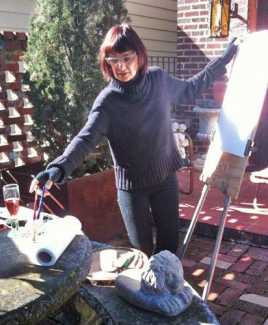 When asked about influences on her art, Carolyn says  ‘I wish I could tell you that there was an event or influence in my early life that prompted me to specialise in erotic art, but that is regrettably a pop-psychological view and has no currency in my life nor among other erotic artists that I know. I think that many people proceed in their lives and in their art having had no clear formative – or de-formative – influences. I know that is true of my own work. It’s impossible for me to separate my sexuality from my creativity. I remember being erotically stimulated and strongly influenced by the paintings of Francis Bacon from a young age, and drawn to artists who portrayed the melancholy, the seedy, the dark and the macabre in painting. I taught myself to paint by studying the paintings of Vermeer, Van Gogh, Leonardo da Vinci, and the melancholy angel Modigliani. Just about all the great Spanish painters have inspired me for their joyful exuberance and passion. I’ve often run my fingers gently over a painting by one of the great masters in museums when the guards were not looking at me, in order to learn how the paint was applied to the canvas.’

Today Carolyn exhibits regularly, and her work has been auctioned by houses including Christie’s, Sotheby’s and Phillips. She has been widely published by American and European presses, and has collaborated with Jani White to create the artwork for the self-help book on conception, The Fertile Fizz. She was the first female artist to be interviewed in the 2010 flagship edition of Art of Man magazine, and her work features in the 2011 anthology 100 Artists of the Male Figure. Paintings by her are included in the collections of the Kinsey Institute Collection of Erotic Art and the Tom of Finland Museum, and she was a member of Idiosynchronism, a group of international artists who proclaimed mischief as their manifesto.

She once asked her eighty-year-old mother what she thought of her work. Her mother responded ‘It’s very honest work, dear,’ following up with a long lecture on shoe fetishism. She told Carolyn she had lived vicariously through her for most of her life. As Carolyn says, ‘When my mum told me it was okay to do something, I believed her.’