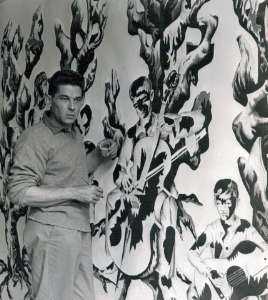 He was born in Saratov, and during the Russian revolution drifted with his family across Russia, taking refuge in Turkey for a while until, when he was fourteen, the family decided to settle in France. In 1935 a friend recommended him to an architect who was willing to welcome him into his office, but he soon abandoned architecture to enter the Fernand Léger Academy. Very quickly Léger recognised his potential, and in 1937 Grekoff executed his first wall mural.

With the outbreak of war Grekoff was mobilised; he was captured by the Germans in 1940 and spent six months in captivity in Laval. It was during his captivity that he met the owner of Editions de Cluny, who, immediately after their release, commissioned him to illustrate several luxury edition books, including Charles Baudelaire’s Les fleurs du mal. These were such a success that the publisher of Crezevault Adressat commissioned seventy-two lithographs for an edition of Dostoevsky’s Crime and Punishment, which took Grekoff two years to complete.

We know very little of Elie Grekoff’s personal life, but he had several close artist and designer friends and colleagues, including the painter Pierre Monteret, with whom he spent much time. He clearly had a deep interest in sexual intimacy, at least when he was in his thirties and forties, and that must surely have included male lovers given the sensitivity and understanding displayed in his Rimbaud and Jouhandeau illustrations.