For an artist who was so prolific and widely known in the 1880s and 90s, it is remarkable that nobody appears to know who the real Frédillo was, or anything very much about them. The name suggests an Italian connection, but ‘Fredillo’ is an uncommon name, and neither ‘Fredilla’ or ‘Fridilla’ much commoner. There is the French-English painter Henri Jean-Baptiste Victoire Fradelle (1778–1865), and the town of Frédille in the Loire valley, but neither yield any clear connection. And so the mystery remains; even the arch-chronicler of French erotic literature Pascal Pia could add no more information beyond commenting that Frédillo’s work was ‘very competent and not without style’. 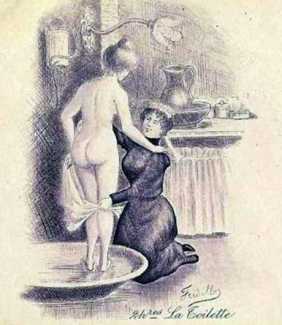 His (and presumably it is a ‘he’) work first appeared in the magazine La Lanterne in 1874, then in the 1880s he also contributed to L’Écho des Jeunes and La Plume. He signed Frédillo both with and without an accent, and sometimes made do with a simple F. From 1880 to 1890 Frédillo worked with the clandestine Belgian publisher Auguste Brancart, and from 1895 to 1911 with the Paris publishers René Pincebourde and Jean Fort. His last known work is dated 1914.