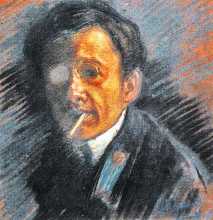 Yury Pavlovich Annenkov, included here with his Frenchified name Georges Annenkoff, was one of the many talented Russian artists who emigrated to Paris in the mid-1920s, never to return.

Born into a literary and artistic family, Annenkoff studied at the University of St Petersburg, and along with Marc Chagall attended Savely Seidenberg’s studio classes. In 1911–12 he spent time in Paris in the studios of Maurice Denis and Félix Vallotton, returning to St. Petersburg in 1914; in the next few years he mostly contributed to magazines, but his book illustration break came in 1917 with a commission to design Maxim Gorky’s book of fairy tales, Samovar. His best-known work is the illustrations for Alexander Blok’s poem, The Twelve, published in 1918, which was so popular it went through three printings within a year.

He became well-known for his stylised portraits – in 1922 he published a volume called Portraits, containing eighty pictures of the key figures of Russian art of the time, and his 1924 portrait of Lenin was printed on banknotes, stamps, and even the front cover of Time magazine.

In the spring of 1924, with the death of Lenin and the beginning of Stalinist purges of the art world, Annenkoff was forced to leave the Soviet Union and moved to Paris. He continued to paint and draw, including some book illustration (he designed the cover for the first edition of Solzhenitsyn’s The First Circle among others), but he turned his energy mostly towards stage, cinema and costume design. In the 1950s, having become a naturalised French citizen, he was film-maker Max Ophüls favourite set and costume designer, collaborating on the director’s last four films. In the last twenty years of his life he worked on more than sixty films, and around a hundred stage and ballet productions.