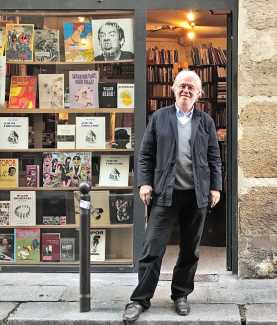 In 1963 the Paris bookseller and small-time publisher Jean-Pierre Faur published a portfolio of paintings by ‘Georges Delfau’ entitled L’invitation (The Invitation). The small printing was quickly snapped up and has been out of print for many years, as has the Dutch version, Liefde op Leeftijd (Mature Love), published by Divina in an equally small printing.

The only real Georges Delfau of any note was a commander in the French army, who died in Algeria, earned the Legion d’Honneur, and is buried in his home town of Roubia in the French Midi. The proof that Faur’s Delfau is a pseudonym is the initials ‘MB’ on several of the ‘Delfau’ paintings, but M Faur is not giving away his secrets, either who the real artist is or why the choice of pseudonym!

A pity, because the ‘Delfau’ paintings are a singular record of well-observed intimacy between real older people, created by an artist with talent and imagination.