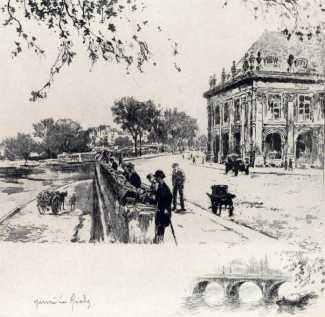 Henri le Riche grew up in Grenoble in south-eastern France, and showing early talent studied first in Rome, where in 1888 he was awarded the Grand Prix de Rome which allowed him to conclude his artistic training. He continued his studies with Eustache Bernard for three years at the School of Sculpture in Grenoble, and then entered the École des Beaux-Arts in Paris, where he was a pupil of William Bougereau and Tony Robert-Fleury.

He began exhibiting his engravings, etchings and pastels in Paris in 1894 at the Salon des Artistes Français, and quickly established himself as an engraver and illustrator, mostly of Paris scenes. He also gained a considerable reputation for his work in sculpture, usually signed with the pseudonym ‘Hirne’.  In 1898 he became a full member of the Societe Nationale des Beaux-Arts and, in 1922 was awarded a Gold Medal and the Chevalier de la Legion d’Honneur from the French government.

Little is known of le Riche’s personal life, except that he lived in the artistic Paris suburb of Neuilly-sur-Seine. The engravings of young women for Musée Secret, made in his mid-sixties, are possibly a wistful homage to remembered intimacies of earlier years.