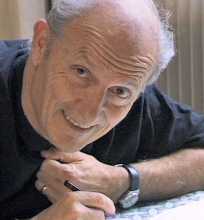 Whether you know him as Jean Giraud, Gir, or (as most people do) Moebius, Giraud was one of the best, most prolific, most-revered and most emulated comic artists of his day. As Gir, the co-creator of Blueberry, one of France’s most popular comic strips, his brushwork was detailed and realistic; as Moebius, he used intricate, visually arresting penwork to explore the subconscious in his creations Arzach, Le garage hermétique (The Airtight Garage) and L’Incal. But Giraud had an impact on the visual arts that went far beyond comics. He was seen as a figurehead linking bandes dessinées with modernism and nouveau réalisme. As co-creator of Métal Hurlant magazine he took comics to an older, more literate audience. In cinema his friends ranged from Federico Fellini to Hayao Miyazaki, and his style influenced dozens of others, including Ridley Scott, George Lucas, James Cameron and Luc Besson.

Giraud was born in Nogent-sur-Marne in the eastern suburbs of Paris, but when he was three years old his parents divorced and he was raised mainly by his grandparents in nearby Fontenay-sous-Bois. He traces his early influence to watching an abundance of American B-Westerns, frequenting the cinema as often as he was able to, and started drawing his own Western comics, a passion which continued through his college attendance at the École Supérieure des Arts Appliqués Duperré. In 1956 he left art school without graduating to visit his mother, who had married a Mexican, and travelled to Mexico, where he spent nine months. The experience of the Mexican desert with its endless blue skies and unending flat plains left an enduring impression on him. In 1959 he was called up for military duty in Algeria, avoiding active duty by having his graphic skills recognised and put to use for the army magazine Forces Françaises. His North African experience was also to have a profound effect on his work.

After leaving the army he visited the Belgian artist Joseph Gillain, who hired him as an assistant on the western strip Jerry Spring. In 1961–2 he also worked on the non-fiction L’histoire des civilisations for the publisher Hachette, and produced illustrations for the satirical magazine Hara-kiri, where he first began using Moebius as a signature. In 1962 he met Jean-Michel Charlier, editor-in-chief of the newly founded Pilote magazine, and was invited to draw Charlier’s new western strip featuring Lieutenant Blueberry. Blueberry was to occupy most of Giraud’s time for the next decade, but it was clear that his imagination was eager for new inspiration. 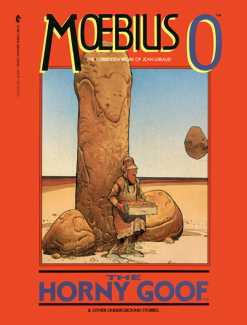 Film-maker Federico Fellini summed up Giraud’s work as well as anyone: ‘He’s a unique talent endowed with an extraordinary visionary imagination which is constantly renewed and never vulgar. Moebius disturbs and consoles. He has the ability to transport us into unknown worlds where we encounter unsettling characters. My admiration for him is total. I consider him a great artist, as great as Picasso and Matisse.’