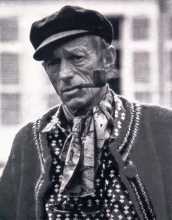 The French artist and illustrator Loïc Dubigeon takes his place here on the strength of three books he illustrated at the end of his life, when in his sixties he turned his skills to producing some of the most graphic, realistic – and beautiful – drawings of sexual intimacy ever created by any artist.

He grew up in the western French seaport city of Nantes, and on leaving school studied at l’École d’Architecture in Paris before becoming an architectural draughtsman. During the 1950s he branched out into graphic design, including packaging and a range of scarves for the fashion house Hermés; he also created murals for buildings in France, New York and Saudi Arabia. In the late 1960s he moved to the Normandy coast of northern France, where he lived in Berneval-le-Grand, near Dieppe, and set up his studio in nearby Derchigny-Graincourt, where he showed and sold his trademark paintings, pastels and prints of seaside villages, cliffs and picnic umbrellas.

In the late 1970s, Loïc Dubigeon started to draw naked figures from life, first in charcoal and later in soft pencil. An acute observer of detail, composition, and the interplay of light and darkness, he used his architectural skills to create drawings of the human body which set him apart from most artists. In 1979 he exhibited some of his nudes alongside other works at an exhibition in Munich, which attracted the attention of the publisher Editions Borderie, who commissioned a series of illustrations inspired by Pauline Réage’s novel Histoire d’O.