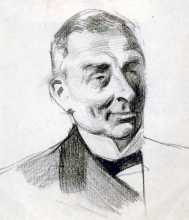 Louis Malteste (he was actually called Jules, but chose Louis as his artist’s name) was a talented graphic artist who had the good fortune to be in the right place at the right time – the place was Paris and the time was 1900. He grew up in Chartres, but moved to Paris as a student and trained as an artist. In 1897 he exhibited at the Salon des Cent, and in 1902 at the Salon de la Société Nationale des Beaux-Arts.

His talent for producing quality illustrations was noticed by clients including all the popular humorous magazines of the time – L’assiette au beurre, Le chat noir, Je sais tout, Lectures pour tous, and Qui lit rit – and he also created artwork for posters and postcards. For much of his work in the 1890s he used the pseudonym Ignotus.

In 1899 he was approached by Charles Carrington (1857–1921), the leading British publisher of erotica in turn-of-the-century Paris, to produce illustrations for Jean de Villiot’s Dolly Morton and Hector France’s Le beau nègre, and it was his ability to produce high-quality work featuring attractive women with enticing buttocks that led to a long string of commissions which kept him occupied for the rest of his working life.

Seeing Dumarchey’s success, Malteste tried his hand at writing spanking erotica as well as illustrating it. For the texts he took on the pseudonym Jacques d’Icy; Qui aime bien (Who Loves Well) appeared, with Malteste-signed illustrations, in 1912, and the sequel Châtie bien (Well-punished) a year later.

After the First World War Malteste and Fort were ideally placed to feed the ever-present interest in spanking, Fort by launching his Collection des Orties Blanches (White Nettle Collection), and the Jacques d’Icy–Louis Malteste ‘partnership’ by producing regular titles for the collection. Monsieur Paulette et ses épouses (Monsieur Paulette and his Wives) in 1921 was the first, and by the time of Malteste’s death in 1928 six more collaborations had been produced, Fifi l’Arpète and Paulette trahie (Paulette Betrayed) in 1922, Suzanne écuyère (Suzanne Esquire) in 1923, Brassée de faits (The Real Truth) and Lucile et Ginette in 1926, and Les mains chéries (The Darling Hands) in 1927. In addition Malteste illustrated at least a dozen other spanking titles during the 1920s.