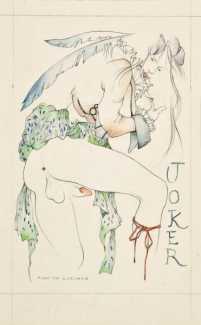 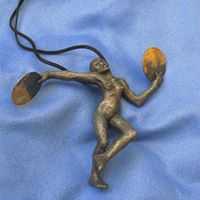 As well as being an illustrator she was also a sculptor and designed jewellery.

We believe that she is the same Monica Guevara who died in April 2012, and of whom the Christian Codrai Foundation wrote in appreciation ‘a brilliant psychotherapist and most of all a person deeply committed to the making of a better world’. This epitaph included some of her own words: ‘I try to let my hands – with as little interference with the rational part of my mind as possible – work to express sensations and emotions that belong to me as an individual to us all as human beings’.

If you knew Monica Guevara and can contribute any further information or a photograph of her, do let us know; and if you have any of her other portfolios, including a complete set of the playing cards or the zodiac, we would very much like to add them.