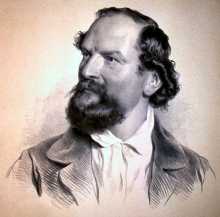 Born in Vienna, Peter Johann Nepomuk Geiger wanted to follow the family tradition and become a sculptor, but drawing and painting were his natural element, a talent which was recognised early by the Austrian royal family and their circle. He illustrated Anton Ziegler’s Vaterländischen Immortellen (Immortals of our Native Land) of 1839, together with numerous illustrations of historical works and poetry. In 1853 he became a professor at the Viennese Academy of Art.