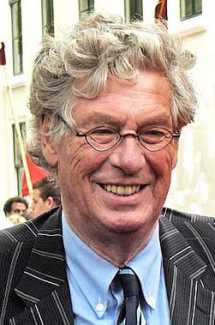 The Dutch cartoonist and illustrator Peter van Straaten was for more than half a century one of Holland’s best-known and best-loved artists, commenting freely and acerbically on every aspect of the ways in which ordinary people handle modern life. Born in Arnhem, he studied at the Gerrit Rietveld Academie in Amsterdam and started his career in 1958 for the Dutch newspaper Het Parool, where he illustrated news reports and produced political cartoons. From 1968 to 1987 he published a daily comic strip, Vader & Zoon (Father and Son), which became a huge success and inspired a television series.

The series Doe ik ’tgoed? (Am I doing well?) was his first foray into illustrating relationships and sexuality, and between 1984 and 2000 he drew a weekly comic strip about a single woman called Agnes. His work was featured in comic books and a yearly calendar, Peter’s Zeurkalender (Peter’s Nagging Calendar).

The first of three sexuality explicit collections of cartoons, Aanstoot (Offence), was published in 1984, followed by Nastoot (Revenge) in 1987 and Lust in 2006.

His older brother Gerard was also a well-known illustrator, and Peter’s son Harmen has already won several illustration awards. Peter van Straaten’s official website (in Dutch) can be found here, and a very good introduction to all his work (in English) is included in the Lambiek Comiclopedia, here.