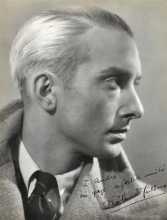 In his lifetime Roland Raymond Ferdinand Caillaud – known professionally as Roland Caillaux – was best known for his appearances in French films, but he was also a talented artist. From his studio on Rue Boulard in the 14th arrondissement of Paris he produced landscapes and portraits, his speciality being young men, especially those of north African origin.

Those who knew him best were also aware that he was an out and active homosexual, enjoying the relative sexual freedom of 1930s Paris and developing friendships with many of the best-known gay writers of the time. It was some time around the end of 1944 when, through the model Édouard Dermit, Caillaux met the author and poet Jean Genet.

Roland Caillaux was fortunate enough to inherit a considerable sum of money from his parents, so was able to live a comfortable life free of financial constraint, and enjoy his friendships with the group of like-minded gay Parisian men which included Jean Genet, Jean Cocteau, Jean Boullet, Maurice Sachs and François Sentein.