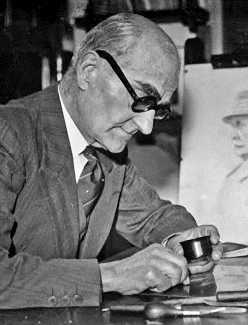 His real name was Raoul Serres, and he grew up in Cazères in the Garonne region of south-west France. He studied art in Lyons as a student of Jules Jacquet, Henri-Joseph Dubouchet and Léon Bonnat, specialising in engraving, and won a Grand Prix de Rome medal in 1906. From 1932 to 1942 he was professor of engraving at the École Estienne in Paris, after which time he concentrated on illustration and postage stamps.

If you do also happen to be interested in his stamp designs, you can read all about them in an article in the December 2014 issue of the French magazine Timbres: L’officiel de la philatélie.