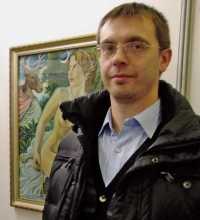 The Ukrainian artist Sergey Kirnitskiy is one of the best-known illustrators currently working in the area of small-scale engravings for modern icons and bookplates; many of his clients return regularly with new commissions, and limited editions of his are eagerly collected.

He grew up in Vinnytsia in the west of Ukraine, and from 1986 to 1990 studied at Vinnytsia Art School, going on to specialise in theatre and cinema design in Odessa. In 1995, while working as a set designer at the Vinnytsia Theatre, he met the artist and engraver David Bekker, who introduced him to the techniques of engraving and the art of the bookplate; Bekker invited Kirnitskiy to work with him in his workshop, which kindled his passion for the style he has made his own.

His big break came in 2009, when his work was included in an exhibition of five Ukrainian ex libris painters in Versime, Italy, and then in the Exlibris Museum in Shanghai. In 2010 he won a major prize in an Italian competition ‘La Sfera Celeste’ (The Celestial Sphere) held by the Biblioteca di Bodio Lomnago, which increased his visibility, especially with European and Chinese collectors.