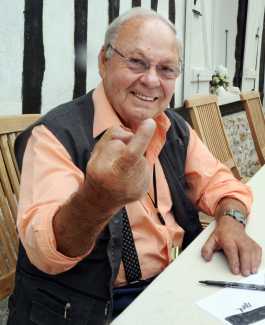 The French cartoonist Maurice Sinet, always known as Siné, was known throughout France for his witty, topical, satirical cartoons. His trademark was a no-nonsense unapologetic view of social and political life, often needing no words to make his statement.

He was a true thinking libertarian who took no hostages, aiming his pen equally pointedly at capitalism, the catholic church, colonialism, religious intolerance, social injustice and undue deference. For many years, from 1981 to 2008, Siné worked at the satirical magazine Charlie Hebdo, until he was fired for criticising ex-French president Sarkozy’s son Jean for what Siné saw as an opportunist proposal to convert to Judaism; he was accused of antisemitism, but when his case came to legal judgement he was cleared and awarded a substantial sum.

In 2010 he launched his own weekly, Siné Hebdo, later renamed Siné Mensuel, which ran successfully until his death in 2016, characteristically producing cartoons about his own death and having the words ‘Mourir? Plutôt crever!’ – ‘Dying? I’d rather die!’ – carved on his gravestone.

Sex and relationships were a regular theme in Siné’s work. Many of his best cartoons on the subject were collected in a 1980 book called Erotissiné, in which he also writes at length about the liberation of sexual exploration and discussion since he started being fascinated in the subject in the 1960s.