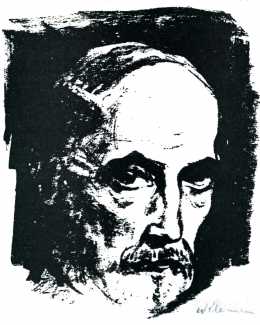 Painter, printmaker and illustrator Walther Klemm grew up in Karlovy Vary, now in the Czech Republic but which when he was born was part of the German Federation and called Carlsbad. He was encouraged to observe nature early on by his teacher father, who supported him in his artistic training. After graduating from high school in 1901, he studied art history at Vienna University, receiving training under Theodor Groll, Anton von Kenner, Felician von Myrbach and Kolo Moser. He was introduced to the art of woodcut by Kuno Amiet, and under the tutorship of Emil Orlik learned the techniques of Japanese colour woodcut. After copying works by Hiroshige and Hokusai, he made his first own colour woodcuts in 1903. As early as 1904 he was successful at the Vienna Secession Exhibition through purchases from the Vienna Court Library, the Munich Graphic Collection, and numerous private collectors and enthusiasts.

In the same year, Klemm moved to Libotz near Prague, and set up a studio community there with Carl Thiemann. He spent the years from 1907 to 1913 in the Dachau artists’ colony near Munich, where he experimented with a range of techniques, including drawing, painting, etching and a range of woodcut methods. In 1913 Walther Klemm was appointed professor and head of the graphic department at the University of Fine Arts in Weimar, where he worked until his death. Here he found a circle of like-minded artists, including Theodor Hagen, Fritz Mackensen, Ludwig von Hofmann and Henry van de Velde.

Though he was a talented artist in a range of media, his artistic legacy is very much in the field of woodcut and etching. Like many artists of the period, his early work was shaped by Japanese art, the principles of which – simple composition and the intensive observation of nature and the precise study of the way animals live and behave – remained with him. He was convinced that this was the only way to reduce a subject to its essentials. His early woodcuts are characterised by their skilful linework and delicate colours. Around 1909 he almost stopped using colour in his woodcuts, and turned his attention more to lithography; by the time he produced the illustrations for Kipling’s Jungle Book in 1920 and Tierbuch (Bestiary) in 1929, he had finally achieved the international recognition he deserved.

Klemm never married or had children, but some of his artwork suggests that he had a lively interest in the sexual aspect of the world. His best-known work, Erbsünde (Original Sin) of 1919 subverts the Genesis creation story to stress female desire, and alongside his publicly-acceptable work he was drawing scenes of debauchery well into his fifties.