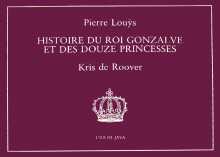 The plot revolves around a king with incestuous desires towards his twelve daughters, each with a name based on the Latin ordinal numbers (Prima, Secunda … ). When Gonzalve hears from the Royal Confessor that the princesses live in constant sinful thoughts, he gives his wife permission to take a pilgrimage, the better to put into practice his criminal intentions. He then summons his daughters, one a night, in order to defile them, only to be surprised by the level of experience they already possess, having been under the tutelage of Lady Chloris, one of the most libertine women in the court. King Gonzalve, the great debaucher, ends up being catechised by his daughters he so much wanted to deflower.

Kris de Roover’s twelve illustrations for this edition of Roi Gonzalve are bold, colourful, and explicit without being overly voyeuristic. The monarch and his daughters are clearly enjoying themselves.

French, Dutch and Spanish editions of the de Roover-illustrated Gonzalve were produced, but sadly no English-language version. An English translation has yet to be made.