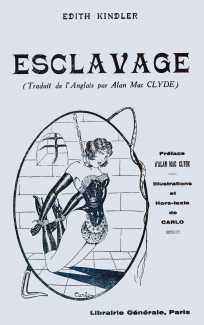 With the awareness, sensibility and hindsight we now have, a book like Esclavage, ou l’agonie sous le fouet (Slavery, or Agony under the Whip) is a Carlo-illustrated volume that should never have seen the light of day, or at least not under this title. Hardly acceptable in 1932, the sexual and racial stereotypes have to be seen as the lens through which BDSM was viewed nearly a century ago, but exist they did, so we would do well to recognise and understand them. Many of the issues around sexual power play are just as important to consider now as they should have been then!

‘Edith Kindler’ is, as is standard for these titles, a pseudonym; other noms de plumes of similar material include Alan Mac Clyde (who supposedly translated Esclavage from the non-existent English and provided a spoof preface for it), Joan Spanking, and Jean de la Beuque. Which were pseudonyms or alternatives for each other will probably never be known.

A sample of the text follows, in which the 'Oriental/Japanese’ Spitz is administering the punishment; read on at your peril …

‘Obey your master!’ said the oriental in a hoarse voice. ‘Obey, or we will start again!’
‘Oh, Mister Spitz, aren’t you going to beat me now?’ said the girl, absolutely terrified.
‘On the contrary, you will be whipped until the blood flows if you don't immediately remove your clothes, and when you are naked, if you have not obeyed fast enough, I will tie you to a chair and we will whip your buttocks to tear your skin off, then we will turn you over and start again on your breasts! Come on, hurry!’
Nevertheless, it took two more strokes of the whip for the girl to understand the uselessness of resistance, and begin to take off her clothes. Little by little she offered the hidden treasures of her body to her torturers, and treasures is the word, as the girl was so plump, her skin was so soft, and her body so delicious to behold.
Her blouse fell, then her skirt, revealing superb shoulders and impeccable legs, yet a little too muscular as often happens with professional dancers. Her flirtatious panties of cream silk, bordered with fine lace, showed off her thighs, a pale strip of soft and remarkably white skin.
Under the threat of her masters, the terrorised girl took off her panties, retaining only an elegant short corset that she wore next to her skin.
She now faced them and, while the Japs held her arms behind her back, the masters came to feel her all over, to make sure of the firmness of the breasts, of the satin softness of her skin, the hardness of her muscles. The girl struggled, moaning, while Will assured himself with a brutal hand of the reality of her virginity.
Then the men let go. So she burst into tears and threw herself at Spitz’s feet, asking him to spare her, so much so that she made herself unbearable and her masters decided to chastise her without further delay.
The girl was made to bend forward, and one of the Japanese gathered her wrists and raised them, forcing her to bow her head forward, her head lower than her buttocks, her legs stretched, thus offering them her firm rump.
Then the other yellow torturer raised the flexible rod in his right hand. The scathing instrument whistled threateningly through the air and fell across her naked buttocks.