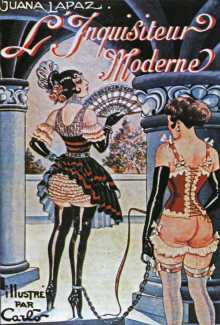 Nobody expects the Spanish Inquisition, least of all Isabelle de B—, the daughter of an aristocratic French family forced to experience re-enactments of some of the harshest humiliations and tortures of that fabled period. The perfect vehicle for Carlo’s imagination, L’inquisiteur moderne (The Modern Inquisitor) by Juana Lapaz (yet another pseudonym) provides ample opportunity for the most extreme of his torture fantasies.

Here is the description of the book from the publisher’s catalogue from the Librairie Artistique et Édition Parisienne Réunies:

The most disturbing confession and the most suggestive revelations of the passion for the suffering and humiliation of others we have ever revealed. This is the story of a young girl of the French aristocracy punished by an unworthy stepmother, towards whom she had had revolted following humiliations and corporal punishment, by delivering her into the hands of a cruel Spanish nobleman, descendent of one of the most notorious inquisitors.
Taken to the castle he owns in one of the wildest regions of the Sierra Morena, Isabelle de B— literally relives the scenes of the Inquisition there, suffering the most refined torments of corporal punishment, submitting to acts of sadism and the rivalry of a young Spanish girl. The young Frenchwoman is about to triumph when the Spanish Revolution forces her cruel victor to flee.
The narrative includes most curious details about the torments of high-heeled boots, tight corsets, kid gloves and the domineering whip, in the very setting where the original Inquisition scenes once took place.
A magnificent volume decorated with rich illustrations, two in colour, with impressive accuracy.