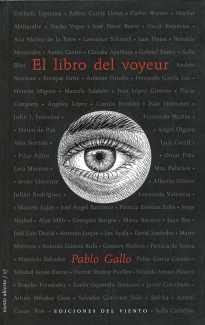 You will need to be able to read Spanish to get full value from Gallo’s book, but it is worth buying for the illustrations alone; all the publisher’s details can be found here. We have translated his introduction to the book to give you a head start …

The origin of The Voyeur’s Book

When I reached a hundred drawings I spread them out on the floor, to observe them at a distance. It occurred to me that it would be good to see them gathered together in a book, and that it would be even better to see them accompanied with short texts by different writers.

In January 2008, thinking about the next stage of the project, I bought a laptop and installed the internet at home; until then I’d visited a booth or a municipal library from time to time to access it. Once immersed in cyberspace I spent some time browsing blogs and literary websites, thus obtaining a good number of writers’ email addresses. I sent my proposal to my chosen writers, sending them two or three drawings and asking them to choose one to set a text to if they wanted to collaborate.

At the end of 2009, after seeing various publishers that showed interest in the project, The Voyeur’s Book came to fruition. It landed at Ediciones del Viento, a Galician publishing house located in La Coruña, my hometown.

And that was, more or less, roughly speaking, the birth of the book you now have in your hands, the origin of The Voyeur’s Book.