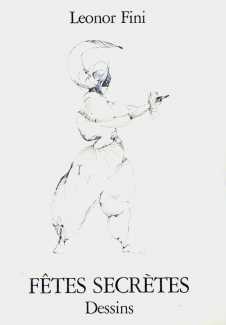 Two important volumes of Leonor Fini’s graphic work appeared in the late 1970s, Fêtes secrètes and Fruits de la Passion. The sixty illustrations (plus a cover design) of Fêtes secrètes (Secret Festivals) were all created within the twelve months prior to the book being printed, and are more finished treatments than some of her earlier work.

Many of the themes from earlier work, including Juliette and Le concile d’amour, are revisited, most of the drawings depicting intimate interactions between more or less stylised participants. Some are highly sexual, some playful, some macabre, but nearly all have a palpable tension and stimulate the imagination to wonder what is actually happening in each scene.

The lengthy introduction to Fêtes secrètes is by writer and photographer Jean Claude Dedieu, who also in 1978 published an illustrated study of Leonor Fini’s work (Leonor Fini, Les éditions de Frédéric Birr). It is virtually impossible to say anything usefully universal about the interpretation of these drawings without compounding their deliberate strangeness or limiting their meaning through unnecessary comparison, though Dedieu tries hard. His final sentence is a particular gem: ‘All contradiction is resolved when the characters encounter their mortal limit.’

Fêtes secrètes was published by Editions du Regard in a limited edition of 5,000 numbered copies, or which 200 boxed de luxe copies included a further four loose prints.