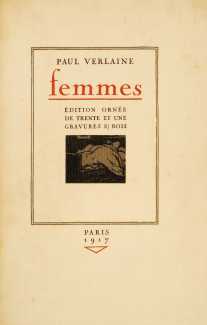 The powerful Daragnès woodcuts for Femmes appeared in two book formats in 1917; an earlier version with just six monochrome images was published in a very small edition under the pseudonym Jean de Guéthary, with the publisher shown as Chez Chikokoillara (what the significance of either was we shall probably never know), and an extended version later, now with the cuts in black and bistre, published by Au Coq Hardi, or ‘The Bold Rooster’. Both editions were almost certainly self-published.