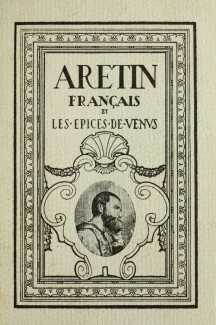 Antoine Borel probably came to know of Aretino through one of his Belgian publisher colleagues, and Borel’s interpretations of I modi were published clandestinely in 1782. Almost every aspect of the publication is clouded in obfuscation to confuse the authorities. It may have been published in Brussels by an obscure printer by the name of Larnaka, or in London; all it says it that it was published ‘par un membre de l’académie des dames’ (‘by a member of the women’s academy’). Later editions published in 1787, 1788, 1803, 1829, 1830 and 1869 give François Félix Nogaret as the translator of the poems from Latin to French, Giovanni della Rosa as the editor, and says that the engravings are ‘d’après les précieux dessins de Jules Romain’, though they are now universally attributed to the Borel/Elluin collaboration.

The Borel/Elluin I modi engravings were not the only interpretations created in the late eighteenth century. Another new series of explicit engravings of sexual positions was produced by the Italian engraver Agostino Carracci for a 1798 edition of Aretino’s poem, printed in Paris as L’Arétin d’Augustin Carrache, ou recueil de postures érotiques, d’après les gravures à l’eau-forte par cet artiste célèbre, avec le texte explicatif des sujets (The Aretino of Agostino Carracci, or a collection of erotic poses after Carracci’s engravings, by this famous artist, with explicit texts on the subjects). The ‘famous artist’ of these reworked engravings was Jacques Joseph Coiny (1761–1809). You can see the Carracci/Coiny engravings here.