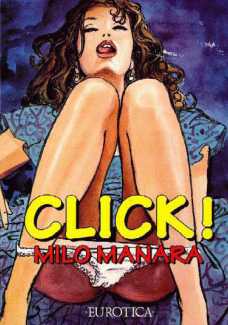 The first volume of Click! follows a woman, Claudia, who has a chip implanted in her against her will by her psychiatrist, Dr Fez, which at the flick of a switch by Fez causes her to lose all her inhibitions and have sex with whoever or whatever is nearest to her in that moment. We find out later that chip is fake, and it is all an elaborate sexual game between Fez and Claudia to try and cure her of her self-hatred. In the meantime, however, we see Claudia attack every level of society; she starts by debasing herself in front of a young salesman at the mall to the shock and horror of her polite society friend, she then causes an obviously-aroused priest to run in terror from her sexuality, before concluding a series of outrageous episodes by crashing a super-rich girl’s sweet-sixteen party, with a hilarious scene in which she crams the girl’s diamond birthday present up her ass while all the rich elite stooges fall over themselves to try and extract it.

As Sarah Horrocks writes in her 2015 Mercurialblonde blog, ‘It’s interesting to think about Click! in its totality, pivoting around the dark horrors of rape and molestation while maintaining a light vibe. It gives the work a weird underbelly that I’m not entirely sure was Manara’s intention. It seems that what Manara was going for was a no-rules bacchanalia, thumbing his nose at society’s fear of sex. But in the process we trip into some really dark shit that isn’t really dealt with in the book, nor are there structures within the book to deal with them. If Click! stopped and paused to consider its own fucked-up-ness it would completely lose its comedic quality, which is what makes the book so memorable. I’m glad those things are in there though; the complications are really interesting.’

The most recent edition of Click! was published by Eurotica in 2004. It is currently out of print. We have just included the first 24 pages of the book and the last; to find out what happens in between will involve you in more research!