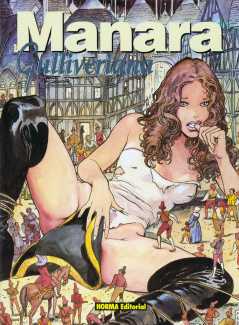 In many ways one of the simplest of Manara’s imaginative storylines, he succeeds in turning a well-known narrative into a visual feast. Even the simplest of images, like the Lilliputian children playing hide-and-seek in Gullivera’s pubic hair, make the reader think and smile. 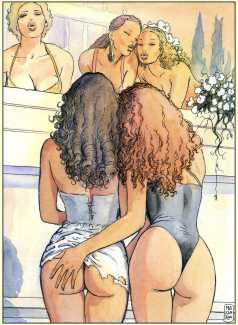 I viaggi di Gulliver, o Gulliveriana was published in Italian by Carlsen, and translated into English, French, Danish and Spanish. Here we include the story, in the Spanish version, as far as Gullivera’s triumphant reception by the Lilliputs; if you want the whole story in English, it is published in hardback by Humanoids.