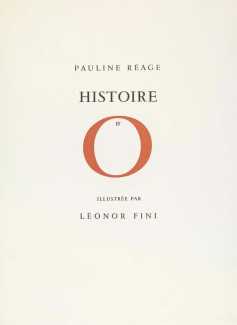 Leonor Fini’s visual interpretation of sexual violence, first given rein in her Juliette illustrations, was continued in the images commissioned by Le Circle du Livre Précieux for a de luxe edition of Histoire d’O, which had been published in 1954 under the pseudonym Pauline Réage.

How the story came to be written, revealed long after its publication by its true author, Anne Desclos of the Nouvelle Revue Française (where she used another pseudonym, Dominique Aury), to have been written by her to impress her writer and critic lover Jean Paulhan, is fascinating in itself – both that a woman could write such a Sadean tale, and that it became such a success so quickly, attracting literary prizes and obscenity charges in equal measure.

The collaboration between Leonor Fini and Anne Desclos was especially fitting as Declos had been influenced by Leonor’s paintings and theatrical costumes in her portrayal of O in the novel. An owl mask which O wears in the narrative was specifically inspired by an owl mask Fini wore to a costume ball in Paris in December 1948. In the final scene of the novel, O is humiliated while wearing such a bird mask; during this humiliation the mask both hides her identity and leads her to self-recognition.

When Leonor was asked why she had agreed to illustrate Histoire d’O, she replied ‘Because it is a very good book. It is a book that possesses the virtue of describing things that are painful and strange. It is quite a cold book, and it pleases me for that reason.’ She produced twelve full-colour illustrations for the book, together with eight line drawings to appear at chapter openings.

In a 2013 essay entitled ‘La Feminité triomphante: Surrealism, Leonor Fini and the Sphinx’, Alyce Mahon explores the elements of Leonor’s Histoire d’O illustrations: ‘Given its theatrical and metaphoric role, it is not surprising that the plumed mask dominates Fini’s preparatory drawings and final ink washes for the novel. Her staging of the sexes is also crucial. The male figure in her lithographs is archetypal: statuesque, strong, phallic. The female figure bears the hallmarks of Fini’s theatrical illustrations, with a nubile body, elongated legs and waifish, wide-eyed expression. Fini’s one portrait of O is reminiscent of her pen and ink study of Medusa of 1950: O’s mouth acts as a symbol for her being, wailing in the midst of a black wash, reduced to an orifice. While Fini portrays O as a willing victim of the violent male, in her choice of palette and frequent recourse to black ink washes around the female form she also evokes a sense of repressed rage or desire.’

Published by Jean-Jacques Pauvert’s publishing house Le Circle du Livre Précieux, Histoire d’O was produced in a limited boxed numbered de luxe edition of 352 copies together with a further standard limited edition of 2,000 copies. A further limited edition of 8,000 copies with the Fini illustrations was published later the same year by Tchou.

The best English translation of Histoire d’O is by Richard Seaver, under the pseudonym Sabine d’Estrée; this is the translation used by the Grove Press and Ballantine Books editions. The many films based on the novel, especially the version directed by Henri-Georges Clouzot starring Corinne Cléry and Udo Kier, are best avoided.