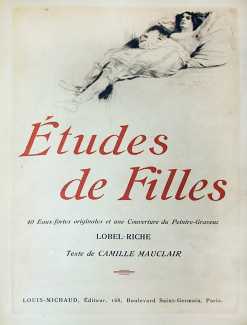 In 1908 Alméry Lobel-Riche illustrated La ville et les champs (Town and Countryside) by Jérôme and Jean Tharaud for the publisher Pelletan. A year later the Paris publisher Louis Michaud, impressed by the Pelletan volume, asked Lobel-Riche what other material he had, and was delighted to see so many images of naked and semi-naked women, all at the very attractive juxtaposition of the risqué and the tasteful. Forty of the etchings were selected, the volume was commissioned under the title Études de filles (Studies of Girls), and the poet and critic Séverin Faust (1872–1945), better known by his pseudonym Camille Mauclair, agreed to write texts to accompany them.

As Henri Babou writes in the introduction to his 1929 study of Lobel-Riche, ‘The volume reveals not only the diversity of talent of Lobel-Riche, but also his breadth, his confidence, and a je ne sais quoi of healthy flesh, even in the observation of the Parisian underworld. Études de filles represent the first chord of the symphony from which Lobel-Riche would go on to develop innumerable themes. The plates radiate such evocative suggestions that a writer and even an aesthetician as reserved as Camille Mauclair was inspired by them to write a poetic and insightful psychological portrait for each of the women so keenly seen, analysed and transfigured by Lobel-Riche.’

Études de filles was published in December 1910 by Louis Michaud in a limited numbered edition of 250 copies. Many of the 73 more expensive copies on Japan paper had extra states of the prints included, and a few also had an original signed colour drawing as we show here.