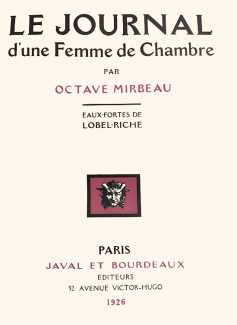 Lobel-Riche shared many of Mirbeau’s views and concerns about a conservative class-ridden culture, especially the treatment of lower class women, and produced a powerful portfolio of etchings to accompany Le journal; his portrayal of Célestine brings Mirbeau’s words vividly to life.