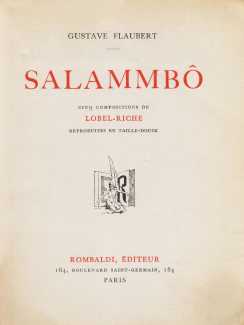 After Madame Bovary, Gustave Flaubert’s historical novel Salammbô of 1862 was his most successful, so it is maybe surprising that it has almost disappeared from the literary canon. Set in Carthage during the third century BC, the novel jump-started a renewed interest in the history of the Roman Republic’s conflict with the North African Phoenician colony of Carthage.

The fictional title character, a priestess and the daughter of Hamilcar Barca, the foremost Carthaginian general, is the object of the obsessive lust of Matho, a leader of the mercenaries. With the help of the scheming freed slave Spendius, Matho steals the sacred veil of Carthage, the Zaïmph, prompting Salammbô to enter the mercenaries’ camp in an attempt to steal it back. The Zaïmph is an ornate bejewelled veil draped about the statue of the goddess Tanit, in the sanctum sanctorum of her temple – the veil is the city’s talisman, and touching it will bring death to the perpetrator.

Contemporary readers, familiar with Flaubert’s realistic work, were shocked and in some instances appalled by the indiscriminate violence and sensuality prevalent throughout the novel, which is why, notwithstanding the praise it received for its style and story, Salammbô remains controversial in literary circles. Nevertheless, it was a massive best-seller, which sealed the author’s reputation as one of the most prominent French writers of the nineteenth century.

It is a pity that Rombaldi only asked Lobel-Riche for five illustrations for Salammbô, as those we have show him using colour very effectively; the frontispiece illustration of Salammbô on Barca’s sculpted head is particularly striking.

The Rombaldi edition of Salammbô was produced in a limited numbered edition of 3,000 copies.