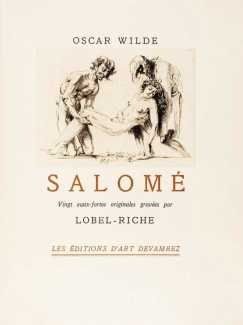 Oscar Wilde’s notorious play Salomé, first published in 1893, and Aubrey Beardsley’s equally scandalous illustrations, were well-known to Lobel-Riche, and he was delighted to be commissioned by the upmarket Paris publisher Devambez to create a new set of etchings for a French edition. Devambez were developing a series of limited edition art books under the imprint Les Editions d’Art, and were well aware that a Wilde–Lobel-Riche collaboration would give the series a flying start.

Several of the etchings clearly take their inspiration from Beardsley, but Lobel-Riche also brought his own imagination to the work, especially in the characterisation of the wronged and vengeful Salomé.

The Davambez edition of Salomé was produced in a limited numbered edition of 185 copies.