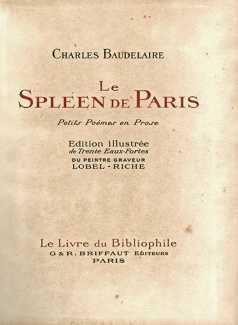 Baudelaire’s Le spleen de Paris, also known as Paris spleen or Petits poèmes en prose, is a collection of fifty short prose poems; the collection was published posthumously in 1869. The title refers not to the abdominal organ but rather to the second, more literary meaning of the word, ‘melancholy with no apparent cause, characterised by a disgust with everything’. Baudelaire wrote of Spleen ‘These are the flowers of evil again, but with more freedom, more detail, and more mockery’; many of the themes and even titles from his earlier collection Les fleurs du mal are revisited. The poems have no particular order, no beginning and no end; the point, he explained, was ‘to capture the quality of life in the modern city’.

After his experiences as an active soldier and an enforced absence from his Paris studio, Lobel-Riche found a kindred spirit in Baudelaire, and similar thoughts about the modern city in Spleen. After the war had ended he had concentrated on exhibiting his wartime works, and it took some time for him to free his soul from so many frightful and painful visions. Gradually, however, and with the help of Baudelaire’s poems, he was able to recollect his creativity and composure, so by 1922 he had a new collection of etchings ready to accompany Spleen.

As he never had before, Lobel-Riche found with Spleen a new sense of fantasy and invention, something like that of Félicien Rops and Gustave Doré, based in reality but with the freedom to explore a larger, more symbolic world.

Spleen de Paris was published by Briffaut in their Livre du Bibliophile series, in a limited numbered edition of 352 copies.