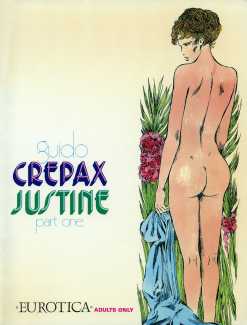 Crepax’s Histoire d’O was very successful, so was quickly followed by a commission to illustrate the Marquis de Sade’s classic Justine.

Justine tells the story of a penniless young girl cast adrift at the age of twelve to make her living after growing up in a convent, after her father abandoning his family, causing the death of her mother. In contrast with her licentious sister, Juliette, Justine is virtuous and maintains her conviction that people are fundamentally good, no matter how they mistreat her. She uses what little money she has to live humbly for two years but, unable to find anyone to help her, is forced to take to the road to seek work. During her journey she continually thinks she has been saved, as when she is employed by the monks of a monastery, but those she trusts most exploit her the most.

Crepax’s art with its spidery, scratchy lines, creative page design and bold storytelling manages to convey the main points the novel makes while indulging in wonderfully freeform page layouts. He retains de Sade’s sardonic humour and his ‘story within a story’ structure typical of novels of the period in which Justine, on her way to be executed, tells her story to two mysterious travellers who encounter her on her journey to the gallows. In Justine Crepax provides exactly the balance of titillation, instruction and moralising at which de Sade’s picaresque novel excelled.

In the first English-language appearance of Crepax’s masterpiece, Eurotica published Justine in two volumes, of which this is the first, taking Justine as far as the forest where she is left for dead by the dastardly Marquis de Bressac. The continuation of Crepax’s Justine in Justine 2 can be found here. For the complete Justine in English, look for the Taschen Evergreen volume, published in 2000, which also includes History of O.