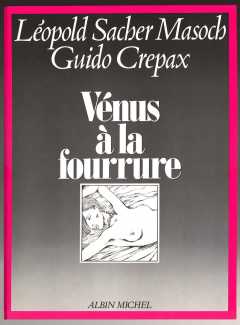 It seems a little odd that while the Marquis de Sade’s works have inspired so many artists and illustrators, the equivalent books of the man who gave masochism its name – Austrian author Leopold von Sacher-Masoch – have resulted in so few creative endeavours. The story (Venus im Pelz in German and Venus in Furs in English) with its themes of female dominance and sadomasochism is semi-autobiographical –  Wanda von Dunajew, the novel’s central female character, is modelled on Fanny Pistor, a determined writer Leopold von Sacher-Masoch was fascinated by. The book tells of Severin von Kusiemski, who is so infatuated with Wanda that he asks to be her slave and encourages her to treat him in progressively more degrading ways. At first Wanda does not understand or accede to the request, but after humouring Severin she enthusiastically embraces the idea, at the same time disdaining Severin for allowing her to do so.

Crepax was commissioned to illustrate a new edition of Vénus à la fourrure by the Paris publisher Albin Michel, and clearly relished the task, producing some of his best work.

In their introduction to the Taschen edition of Venus in Furs, Paolo Canepelle and Gunter Krenn write: ’No other work by Alexander Sacher-Masoch has attained similar renown. It was widely acclaimed by his contemporaries, notably by Emile Zola, Henrik Ibsen and Victor Hugo, and was never censored. But Sacher-Masoch’s posthumous fame is largely the result of a categorisation made by the psychiatrist Richard Krafft-Ebing in his Psychopathia Sexualis, in which he labels a particular perversion as “masochism”. It was not until Gilles Deleuze’s famous study, Présentation de Sacher-Masoch, that the necessary distinctions were made and the largely unjustified stigmatisation which this once popular author had suffered was finally removed. Deleuze points out that neither Sade nor Sacher-Masoch are pornographers; they are, rather, “pornologists”. This is a point that Crepax has clearly intuited. Our first view of Wanda, the Venus in Furs, is that of a voyeur: we see her through a keyhole. Severin/Gregor observes the object of his desire, then serves tea at her command. Crepax’s women have the sensuality of a model from a Klimt painting; by contrast, the gestures and behaviour of his men have something of the over-embellished Jugendstil objet d’art: they are themselves merely ornamental. Large images predominate, and the many close-ups place the reader at the centre of the action. The links between the frames of the drawings are closer than in other Crepax works. The most striking innovation, which underpins all the others, comes at the end of the book; Crepax sends Severin off to Sigmund Freud (rather than the logical but less popular choice: Krafft-Ebing) to recount his case. In doing so he illustrates the psychiatric practice of citing examples from literature, whether it be Oedipus, the Marquis de Sade or Sacher-Masoch. Indeed, what Crepax has done throughout is to place himself in the role of the psychiatrist, presenting the case history and illustrating all that the patient seeks, in his own narrative, to hide; this is interpretation as projection. This addition also confirms Crepax’s preference for open endings; it forces the reader to re-examine the entire story.’