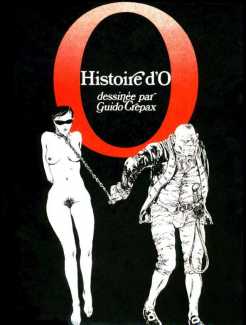 Crepax was commissioned to produce illustrations for a new edition of Histoire d’O by the Paris publisher Franco Maria Ricci Editore, and very much enjoyed the opportunity, researching historical settings and experimenting with exciting page layouts.

As Stefan Prince writes, ‘It could be said that Valentina, described by Graziano Frediani as “the allegory of a need, a mirror in fragments, the mark left from a laceration”, has in Crepax’s Story of O become Madam O, the plaything of the valets and members of the Roissy mansion, of her lover René who takes her there, and of Sir Stephen who claims ownership by having O branded with his initials. The story unfolds like an adult fairy tale, familiar territory for Crepax. With consummate skill, he takes every opportunity presented by this sadomasochistic literary classic to busy his pages with all manner of menace, stylised violence, eroticism and sex. Whips, masks, erect penises, rounded breasts, and marked buttocks proliferate. Wilinsky, the French illustrator, said Crepax drew the best ass of any comic strip artist, and certainly that part of O’s anatomy comes in for its full share of cruel treatment in Story of O.’ 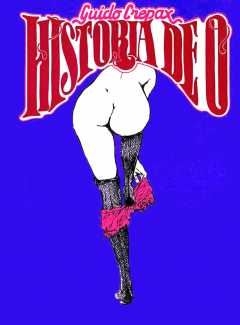 The version we have here is the Spanish edition, published in 1981 by Lumen. For an English-language version you will need to find the elusive omnibus volume published in 2000 by Taschen Evergreen, which includes both Story of O and Sade’s Justine.