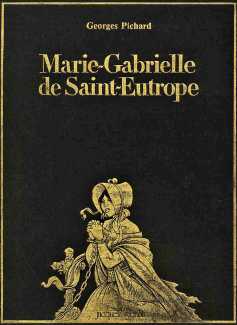 Marie-Gabrielle de Saint-Eutrope was published by Glénat, and almost immediately banned by most booksellers, which only made it all the more desirable. Set in the eighteenth century, it is a powerful accusation against the crimes committed in the name of religion. From the assassination of ‘dissenters’ and fanatics living out their hatred towards women, to the unspeakable suffering in many ecclesiastical institutions in which the ‘staff’ can indulge their sadistic tendencies without hindrance, Marie-Gabrielle pulls no punches, and is one of the most graphic torture comics ever published.

The reviewer Fiona Jerome has written, ‘The problem for most people with Georges Pichard is that he was an extraordinary painstaking artist, superb draughtsman, master of rendering, inventive layout artist and sarcastic humourist. Yet his best work involves extreme sexual sadism, usually on or by nuns. As a result he has never really received the recognition he deserves, especially outside France. Get over it, folks! His work posseses a sly, cynical humour, a deep understanding and subtle undermining of the function of sexual fantasy – and oh my god is it beautiful, not to mention technically amazing.’

Interviewed in 2002 and asked about Marie-Gabrielle, Pichard explained ‘I wanted to see how far I could go, to test the publishing freedom and to attempt religious imagery. There are all kinds of religious prohibitions, which are mostly sexual. I wanted to put these prohibitions in pictures. For some people it is pornographic, but in my mind it is not. Of course, these are violent images, often difficult to accept, but which corresponded very well with the religious texts I read and used, texts published by obscure priests from the end of the eighteenth to the beginning of the twentieth century – a quite surprising literature.’

As if the 140 pages of Marie-Gabrielle de Saint-Eutrope, Pichard’s longest work, were not enough, in 2016 Glénat added the equally-long and previously unpublished Marie-Gabrielle en Orient for an ‘Édition Integrale’. If you are a Pichard fan, the link to buy it is here.