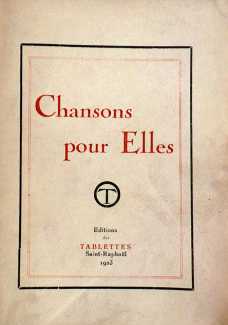 Chansons pour elles (Songs for the Women) is the tenth poetic collection in verse by Paul Verlaine, published in 1891 by his regular publisher Léon Vanier. Composed of twenty-five medium-length poems, the collection was inspired by the poet’s liaisons with Philomène Boudin, also known as ‘Esther’, and with Eugenie Krantz, or ‘Mouton’.

The Calbet illustrations for this edition of Verlaine’s poems show him at his most sparing, using different shades of red chalk to illustrate the intended simplicity of the poet’s love of the important women in his life.