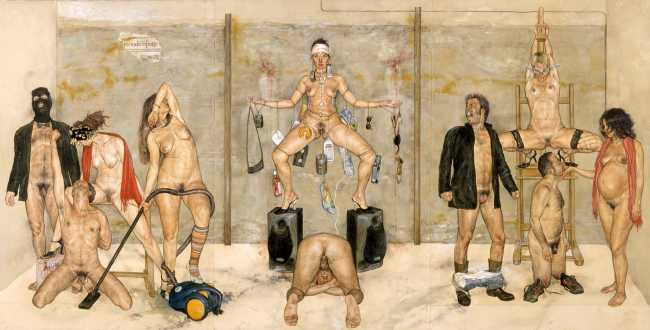 Though Riccardo Mannelli had been drawing and painting the human figure throughout his career, around 1999 he started concentrating on the naked human form, both in its intrinsic qualities and as a statement about the place of nakedness in the modern everyday world. This included both straightforward figure drawing and the study of naked couples and groups.

The couples paintings, mostly from the period between 2000 and 2012, were exhibited in ‘Notes for the Reconstruction of Beauty’ at the Gagliardi Gallery in San Gimignano. In 2015 his work was shown in a two-artist exhibition, ‘Rops + Mannelli’, at the Philobiblon Gallery in Rome and the Palazzo Ducale in Urbino, curated by Vittorio Sgarbi, and in 2016 his first major show outside Italy was exhibited at the Building Bridges Art Exchange in Los Angeles. This exhibition included several of his large multi-character works, exploring the juxtaposition of naked and clothed people engaged in a variety of otherwise everyday tasks, an exploration which is ongoing.

Looking at Mannelli’s paintings executed in the past few years it is possible to see two distinct trends in his exploration. One depicts the most intimate episodes of human life, the works representing couples entangled in emotional, physical relationships. The guiding emotion here is love, the ultimate winner in all the fights of life. On the other hand are his confusing, abstracted narrative group scenes, which place together the clad and the naked, portraying the innermost fantasies, the dirty reality of imagination, subjects that are generally condemned or considered rather appalling. Essentially these are depictions of everyone’s imaginings, but through their mundaneness they also contain something utterly forgiving. They allow the observer to see a human not as a dirty animal, but as a beautiful, complex, misunderstood being, a wonderful creation of nature.

Above all the works of Riccardo Mannelli are there to be enjoyed rather than over-analysed. In his work are strong influences of Félicien Rops, Gustav Klimt, Egon Schiele, George Grosz and Otto Dix. Subtlety of colour complements the skilled draughtsmanship, emphasising what we are supposed to see – the sheer beauty of humanity in all its aspects.