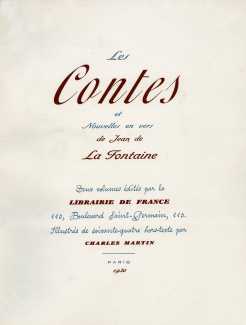 Some of the etchings are deliberately titillating. For ‘La chose impossible’ for example, in which a woman outwits the Devil by challenging him to straighten out a pubic hair, one illustration shows her with her head modestly lowered and her private parts covered, but in a second she lifts a wild froth of petticoats to reveal all.

The range of illustrations demonstrates Martin’s mastery of composition, line and colour. He is not afraid to fill a large part of the page with almost pitch black, place the action in one corner, or use a daring and unconventional perspective.

The Martin-illustrated La Fontaine was published in two volumes by the Librairie de France, in a limited numbered edition of 3,415 copies.