A few years after the Petit chaperon rouge portfolio, and a good decade before the first of the Père Castor children’s books featuring friendly animals like Mischief the Squirrel and Frou the Rabbit, Rojan was honing his animal-drawing skills with another set of drawings. Again almost certainly a commission to raise some much-needed income, this portfolio of ten detailed coloured pencil drawings show both skill and wit in imagining both parties apparently enjoying their shared experience. 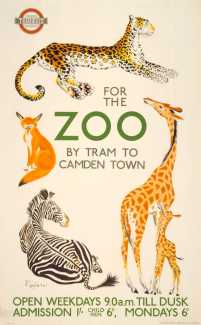 As it was a one-off commission, this portfolio is not dated, so could be from any time in the 1930s. What we do know, however, is that in 1935 London Transport commissioned Rojan to produce artwork for a poster advertising travelling to London Zoo by tram from Camden Town station – a fascinating juxtaposition of animal-related artwork. The London Zoo poster is one piece of Rojan memorabilia that anyone can purchase; framed copies are available from the London Transport Museum shop here.