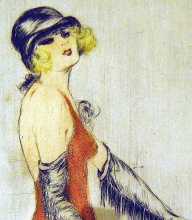 Vala Moro mostly painted dancers, women dancers, and her output is one of the best resources we have to understand the range of dances and costumes that would have been seen in Vienna’s many cabarets during the 1920s. In 1924 the Vienna publisher Artur Wolf Verlag published a colour portfolio of ten of her drawings, Tanz (Dance), with an introduction by the dance designer Emanuel Saint-Yves; the edition of 350 copies sold out quickly, many to American collectors.

Artur Wolf’s wife Katharina was an enthusiastic collector of Moro’s drawings, paintings and engravings, but when she died in December 1932, less than a year after her publisher husband, the entire collection was sold at auction and dispersed. None of it ended up in public collections.

We have managed to piece together a representative selection of Moro’s work, and have included most of the Tanz illustrations, but we know that she probably created several hundred images during the creative 1920s.