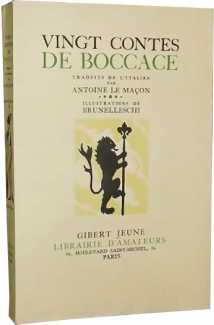 Umberto Brunelleschi’s illustrations for the famous tales of Boccaccio’s Decameron are probably his best-known, but they also mark the beginning of a shift into relative illustration mediocrity. To be fair, he was almost certainly producing exactly the escapism his Parisian publisher and their clients were asking for as Europe slipped slowly into social and political uncertainty – and he needed to be working to survive.

His thirty-two illustrations to this popular two-volume edition still bear the hallmark of a professional designer-illustrator, but the relatively poor print quality does not do justice to his skills.

The Brunelleschi-illustrated Contes de Boccace was published by Gibert Jeune, Librairie d’Amateurs, who had become the almost-exclusive publisher of Brunelleschi’s work. It was printed in a two-volume numbered edition of 3,000 copies. Gibert Jeune’s Decameron was very successful, and they produced further limited editions in 1940 and 1943.