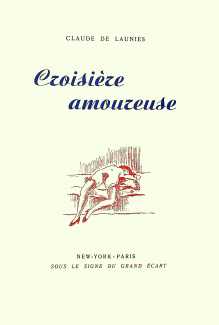 It’s the mid-1930s, and the great French ocean liner Normandie is en route from New York to Cherbourg. On board is a young American woman, Marjorie, who has heard all about the French ways of l’amour. She doesn’t have to wait long, allowing herself to be seduced by an attentive young man during the voyage. But it is in Paris that she perfects her sexual experience, where in her own words she ‘learns love’ and ‘how to dress – and undress’. Whether or not the French city deserves its reputation as the capital of love, Marjorie experiences pleasure in every sense of the word, including sodomy, lesbianism, sadomasochism, several affairs, and even as a ‘taster’ of potential lovers for a countess.

Croisière amoureuse (Love Cruise) gives its author’s name as Claude de Launies, a pseudonym used by both the pioneering authoress Renée Dunan and the prolific Johannès Gros. The novel was published by the master of clandestine publishing Maurice Duflou, who gave Croisière amoureuse the imprint of ‘Sous le signe du grand écart’ (‘Under the sign of the great split, or great difference’), maybe to emphasise the contrast between New York and Paris, the two supposed places of publication, and possibly also a reference to the classical ballet term ‘écarté’ – separated or thrown apart. There is definitely an adundance of thrown-apart limbs in this portfolio.

The twelve anonymous colour illustrations are pleasing in their naivety, performing their task of illustrating the text quite literally with the minimum of artistry.

Croisière amoureuse was published in a limited numbered edition of 350 copies.