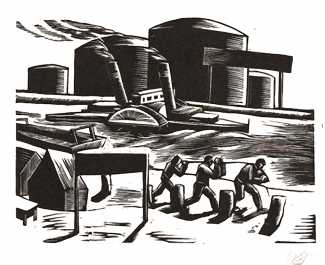 Schatz was a master of woodcut, possibly the best of his generation. Many of his works in this technique, showing motifs from the world of work and industry, are rightly considered icons of working-class culture. He was fortunate that just as he was leaving art school and looking for work, Viennese publishers were on the lookout for artists who could produce high-quality but easily-reproducible illustrations for a range of newly-popular books by authors like H.G. Wells, Jack London, Stefan Zweig, Arthur Roessler and Ernst Preczang. The first of more than 1,500 Schatz woodcuts were produced during the 1920s.

In 1923, Schatz made the acquaintance of the Viennese gallery owner Otto Kallir-Nirenstein, who was one of his most important patrons and continuously presented his woodcuts and paintings in his Neue Galerie. In the same year the Austrian collector Fritz Karpfen published an important study of Austrian art, which included the young Schatz. In the same year he created a portfolio of twelve woodcuts featuring Venice, with a foreword by the art historian Erica Tietze-Conrat, but the highlight of the decade was the 1927 volume Die Neue Stadt (The New City), created for the Berlin-based Gutenberg Book Guild. Die Neue Stadt is a poem by Josef Luitpold, celebrating ‘a city built for the people’; Schatz contributed eleven powerful woodcuts and also produced blocks for the title pages of the book.