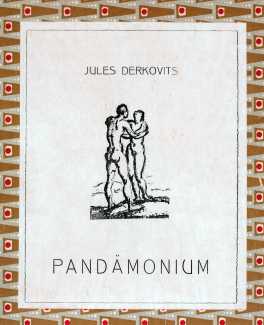 The idyllic environment of the art colony at Nyergesújfalu had a huge impact on Derkovits’ artistic development and world view. His drawings, watercolours and etchings from this period often include nude figures in an Arcadian landscape, celebrating the joy of human existence living in harmony with nature. It was a highly productive period, during which he was exploring new techniques, especially copper engraving, and imaginative subject matter. He was also in love with Viktória.

A critic from the period wrote, ‘These are images with a strange flavour and a bucolic atmosphere; forest landscapes with sad people with their heads bowed, hunched under the trees. The longings of city dwellers speak in them – to go beyond the urban confines, out into nature, out into the open.’

In the early 1920s Derkovits made ink drawings for Milán Füst’s novel Advent , lithographs for János Arany’s Toldi, and etchings for Tamás Moly’s Carnival. Hungarian Writing published a series of linocuts and reproductions of his paintings. The same new-found freedom and technical expertise also resulted in his erotic portfolio Pandämonium, a series of twelve lithographs featuring giant penises and gushing vulvas. It is not hard to tell what was on his mind, though these images display more than naked sex; they also embody the power and potential of shared procreation. The title suggests the unrestrained chaos, the abode of inner demons, that Derkovits allowed himself to experience in his rural paradise.

Pandämonium was published in an edition of 300 copies, each signed by Derkovits but with no indication of a publisher, which suggests that it was self-published, probably with Kernstok’s assistance and support. It is interesting that for the portfolio he used the French version of his first name, Jules, suggesting that some of the edition was destined for sale in Paris.