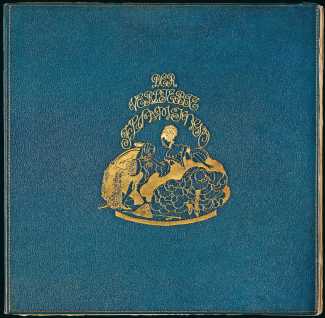 By 1923 Hanns Pellar had been associated with the Mathildenhöhe artists’ colony in Darmstadt for more than a decade, producing a regular supply of the ever-popular portraits of members of the aristocracy, mostly of the female variety. His numerous portraits of women had earned him the title ‘The Painter of Elegance’, and his circle of patrons included the Grand-Duke of Hesse and rich entrepreneurs such as the banker Fritz von Waldthausen and the publisher Gustav Bock.

We know little of Pellar’s family and personal life during this period, but it is clear from the Flamingo portfolio that in his mid-forties his rococo imagination certainly included sexual fantasies, and from the initials ‘LL’ engraved on the back of the mirror in the sixth plate we can guess that the patron for the series was the Grand-Duke Landgraf Ludwig himself.

Symbolically in art, flamingos have often represented romantic love, partly because a pair of their intertwined curved necks can be interpreted as a heart, and partly because pink has traditionally been the colour of love. For the engravings included in Der verliebte Flamingo (The Beloved Flamingo) Pellar created a rococo beauty, presumably called Flamingo, who is pictured in colourful flagrante delicto with various suitors, including stylised oriental and black characters – and an actual flamingo. Most of the plates are known in different colour combinations; we have included here two versions of Plates 9 and 5.