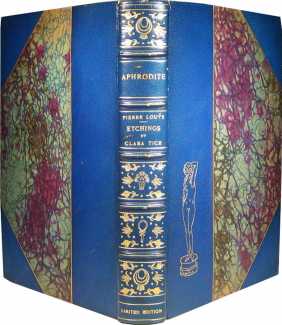 Clara Tice produced ten etchings for this English-language translation; 650 numbered copies were printed, of which 100 included hand-coloured plates. The non-prurient depiction of genitalia of both sexes by an American artist, especially by a woman, was very advanced for the time, and was no doubt beneficial to sales.

The English translation of Aphrodite was banned by US Customs for many years; reviewer Dorothy Parker noted how difficult it was to obtain in New York, and that a play by George Hazelton based on the book was successful mainly because it had been denounced as obscene by the city’s mayor.