Paris-based publisher Gibert Jeune at Librairie d’Amateurs did so well with Umberto Brunelleschi’s interpretations of Boccaccio’s Decameron that he quickly commissioned the artist to produce illustrations in a similar vein for new editions of the tales of La Fontaine and Casanova.

Brunelleschi produced sixteen colour illustrations and 42 small black and white illustrations for Contes et nouvelles de La Fontaine; as with the Decameron illustrations they are accomplished and professional, but lack the spark of his more adventurous work. They were, however, highly popular, and the Gibert Jeune La Fontaine was reprinted on a regular basis. 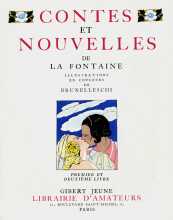 The first limited numbered edition of the Brunelleschi-illustrated La Fontaine was produced in a print run of 3000 copies as a two-volume boxed set; further limited editions appeared in 1940 and 1941.